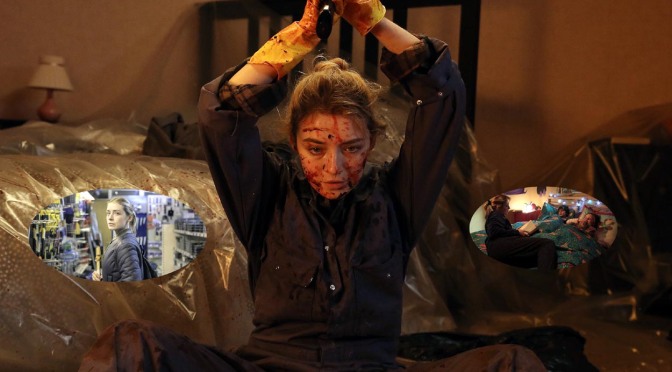 These are extraordinary times, to be sure – and you don’t need the likes of me to inform the reading public of such things.  Nevertheless a ripple effect has, not surprisingly, spread its concentric circles of contemporary inequality into the motion picture industry, aka the revenge genre.  One of the spinoff results has been the flourishing of a deserved sub-genre: the lower-middle class female payback flick.  Perhaps the best example of this (to date) is the 2019 action-horror pic A GOOD WOMAN IS HARD TO FIND, now on DVD from the terrific (and progressive) gang at Film Movement (in conjunction with February Films and Frakas Productions).

An Irish-Euro co-production (largely filmed in Belgium), A GOOD WOMAN takes the genre to new heights.  Whereas previous entries like the misguided Trumpian racist Peppermint and the entertaining blaxploitation throwback Proud Mary heralded women wronged and/or fed up, A GOOD WOMAN doesn’t center on a super female killing machine (either groomed from adolescence nor trained in the martial arts).  Sarah Collins is an average single mom, a widow with two small children, whose husband, an alleged drug dealer, was murdered.  Steadfastly loyal, Sarah refuses to believe the evidence of her spouse’s wrongdoing, but is stymied because she’s basically a nobody.  Even less so, as the police couldn’t be more apathetic in finding the victim’s killer (“Just let sleeping dogs lie.”).  The situation becomes worse at home when Collins’ own acid-tongued mother sides with the cops and eschews her daughter.

But Sarah knows better, and she is right.  With total ostracization and dwindling finances becoming an issue, the determined woman has to find resources to keep her going, and to prevent the walls (physically and psychologically) from closing in.  Also, she must keep on the “good face” for her son (who saw the murder and has been mute-traumatized ever since) and daughter.

And this isn’t even the crux of her woes.

Tito, a local scumbag druggie/thief hits a hood’s main cartel, and, as (rotten) luck would have it, breaks into Sarah’s home to hide-out.  The thug thinks he’s hooked into a dream deal.  Making a fortune from the stolen drugs and having a terrified woman as his new sex toy.

And here is where Tito lives to regret his decision, and Sarah asserts herself to salvage respect, dignity and fight for the safety of her children.  And it ain’t pretty.  The violence the young woman is capable of shocks Collins as much as her targets, but wins over her estranged mater (“You have to be a bit of a bitch!”), helps to solve the murder and horrifies the baddies.  LSS: Don’t mess with a mom!

The fact that it’s all believably and logically presented is a big nod to director Abner Pastoll, writer Ronan Blaney, and star Sarah Bolger.  Other key performances include Andrew Sim, Jane Brennan and Sean Sloan as a predatory supermarket detective who pegs Sarah as easy prey (his comeuppance is a highlight).

The DVD of A GOOD WOMAN IS HARD TO FIND is quite shipshape, with nicely composed  anamorphic widescreen imagery (by d.p. Richard C. Bell) rendered faithfully and an effective stereo-surround track (containing a churning score by Matthew Pusti).  There are some nifty extras as well, including deleted scenes, outtakes, a “Making of” featurette and audio commentary by director Pastoll.

Of course, the pic did not get a major release here, due to it’s being a foreign item (albeit in English) from a small distributor and, of course, the emerging pandemic.  Social media comments certainly reflect the misogynist attitudes of dumbass males who can’t fathom the concept of an enraged average 2020 female movie character while having no credibility problems with John Wick.  Ignore them, and check this out.  Methinks you’ll be rewarded by the results and will champion the fantastic work of Ms. Bolger.