Produced by the legendary Raymond Chow for his Golden Harvest company, HEROES is actually the pic that began iconic director John Woo’s ascension up the international celluloid ladder.  The director, who until this point, had been mainly known for comedies, re-channeled and ratcheted up his outrageous energy in this sanguinary tale of mercenaries taking on the illicit drug trade.  Yep, it’s HEROES, an 89-minute exercise in balletic violence, that laid the groundwork for Woo’s later celebrated works, A Better Tomorrow, The Killer, Hard Boiled, Bullet in the Head and Once a Thief; influencing many that followed, primarily Quentin Tarantino and Robert Rodriguez, Woo, himself took the baton from the likes of John Ford, Howard Hawks, Raoul Walsh, Sergio Leone and, most notably Sam Peckinpah (down to the slo-mo sequences of carnage and destruction).  HEROES is, in short, a cinematic textbook of stuntwork coordination and unhygienic blood Bathory (as in Elizabeth) that had never (at least in Hong Kong grind epics) been achieved in quite such an artistic or technically impressive way – all the more startling for the modest budget.

The narrative concerns top commander Chan Chung (Ko) and his soldiers of fortune who accept a mission from several Thailand politicos to quell the flow of illegal drugs in the mountains, not fully anticipating the sophisticated operations the ruthless crimelords run via money, sadism and fear.  Added to the equation is the demand that they capture the Golden Triangle (Thailand, Laos, Cambodia) cartel’s leader General Samton.  Furthermore, the enemy is aided by the unexpected participation of a communist Vietnamese colonel (Lam Ching-ying), his troops and the superb village trackers who essentially function as the evil military’s slaves.

From fade-in to fade-out, there is barely one moment this isn’t filled with bone-crushing splatter and tension, thanks to Woo’s unflinching direction and the tight script by Woo, Peter Ho-Sun Chan and Leung-Chun Chiu.  Ko’s powerful presence fuels the proceedings, allowing for several subplots, featuring the relationship with his young son and pretty sister-in-law guardian and a reunion with an American buddy from Nam (Philppe Loeffredo), who now lives in the rugged terrain with a bevy of beauties/hookers (who also are trained for combat).  A stunning French reporter (Cecile Le Bailly), raped and tortured by the colonel’s brigade, is rescued and also joins the ragtag group in their mission that ends in a surprisingly moving way.  I suspect many Hollywood producers who helped Woo gain a foothold in the West Coast moviemaking community (Face/Off, Mission Impossible 2, etc.) likely missed this pic, as it certainly portrays a downbeat view of America.

It should be noted that Woo’s trademark techniques are already evident in this embryonic but key work: the poignant relationship between father and young son (the latter who defiantly displays his father’s stubborn attitude), women who take no shit from their male counterparts, dark lowbrow humor (a dice game and “cookout”) plus the aforementioned expertly composed bravura demonstrations of ferocity and savagery.

As indicated, HEROES SHED NO TEARS looks fantastic in this new widescreen 1080p transfer (giving fans a new appreciation of d.p. Kenichi Nakagawa’s excellent work), and sounds just as good in stereo-surround (either 5.1 or 2.0, your choice), available in Cantonese, Mandarin (each w/English subtitles) or an English dub.  A suitable score by Siu-Lam Tang caps the audio.

A wonderful recent interview with star Eddy Ko makes for a terrific supplement, revealing the veteran action star’s astute observations regarding the Asian film industry then and now, working with Woo, plus a treasure trove of other marvelous reminiscences.  FYI, the title is a cynical one, leaving audiences to ponder a choice since a) heroes DO shed tears or b) that there simply are no heroes. 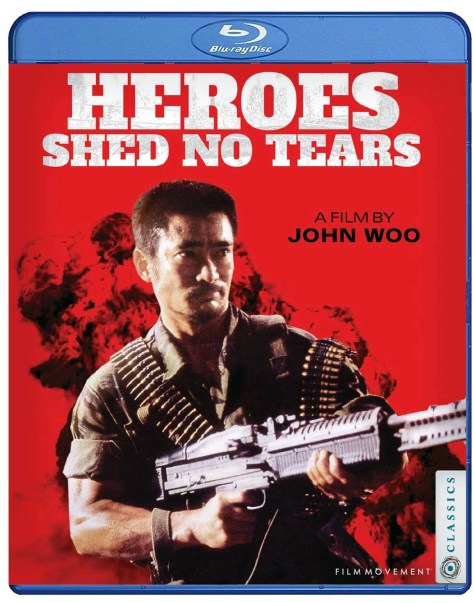