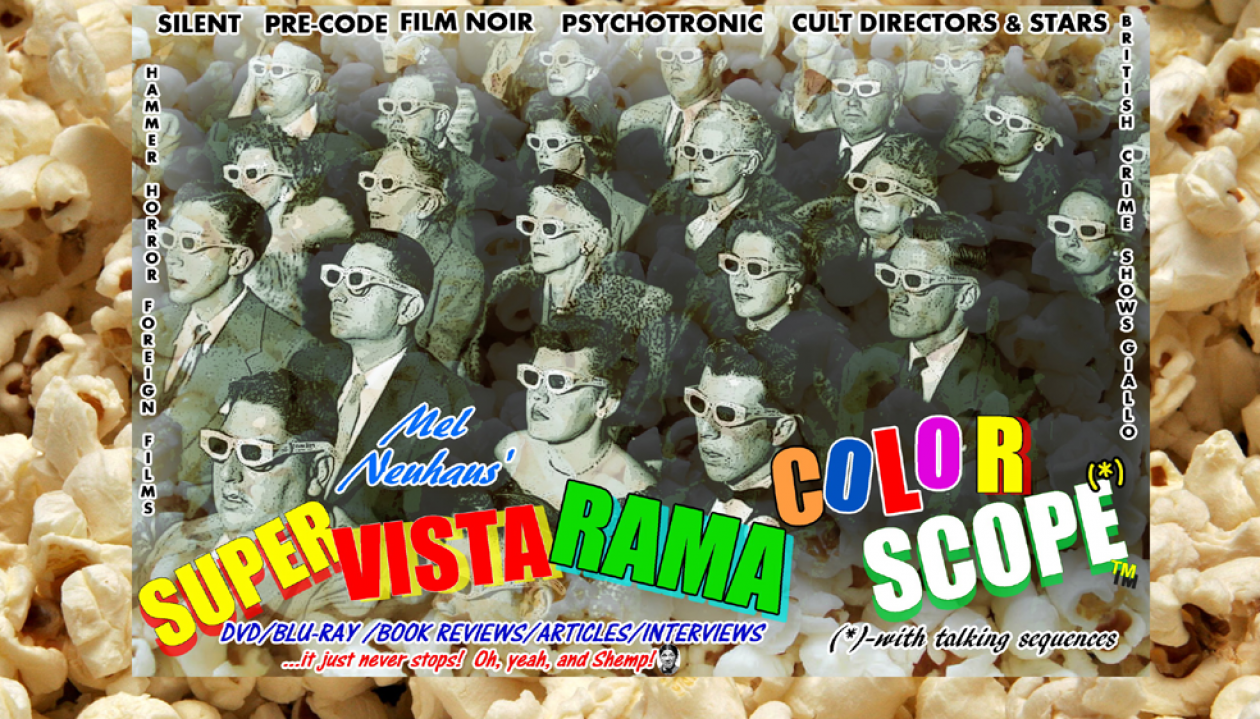 Many of the supreme delights of the ongoing Olive Films/Paramount Home Video series encompass the inclusion of the relatively erratic/oddball titles from the studio’s vault. While 1962’s IT’S ONLY MONEY isn’t the most unknown of the hen’s tooth batch, it certainly remains (up until now) the rarest of the 1960s Jerry Lewis output. It got a fairly discreet no-fanfare release in ’62 and was the least talked-about of the comedian’s post-Martin & Lewis works. For me, this was more than a slight because I love IT’S ONLY MONEY, and consider it not only one of Lewis’ best flicks – but one of the top four of the eight pictures he made with Frank Tashlin (for the record, this was the sixth – my other three faves being Artists and Models, The Geisha Boy and Who’s Minding the Store?).

The movie has been sloughed off by the masses due to both its scant screenings and the “so-what?” attitude that Lewis attached to the vehicle. It was a fairly cheap project – quickly thought out, and even quicker filmed in late 1961 – sandwiched between the showy extravagant Technicolored masterpieces The Ladies Man and The Nutty Professor. IT’S ONLY MONEY was lensed in black and white – the last monochrome movie Lewis would ever make; however, it is the sparse look and B&W photography that ironically pushes it to the top of the great Hollywood genre spoofs.

In a nutshell (with the industry’s then-prime cashew at the head), IT’S ONLY MONEY is a film noir parody pinpointing the plethora of private-eye sagas that flooded the big and small screens and pulp paperback racks throughout the decade following World War II. It’s a movie that’s perhaps is a bit too smart for its own good – complex in its seemingly simple construction as to rise way above the craniums of the average popcorn-muncher.

In Tashlin’s able mitts, IT’S ONLY MONEY’s multi-leveled cinematic architecture targets a number of subjects, scoring a bulls-eye in each one: 1) Tashlin’s animation roots; 2) classic noir; 3) 1960s noir; 4) modern-day technology. All of these intertwine like the non-disclosed tentacles of Citizens United.

Jerry portrays Lester March, an orphan who ekes out his existence as a TV repairman. Television is the paradigmatic theme, as the movie’s noir trappings specifically zero in on the country’s obsession with the detective tele-series, primarily Peter Gunn. Lester’s idol is Pete Flint, a suave babe-magnet gumshoe, hilariously enacted by the couldn’t-be-more-opposite Jesse White. Donning a trench coat and fedora and living out of his office of booze-filled file cabinets, Flint is sleazeball, who eventually gloms on to the fact that Lewis is heir to a mega-million dollar fortune left by the murdered “founder of TV.” It’s absolutely the greatest of White’s many memorable roles.

Jerry’s character is the most-animated of any of his movie portrayals (and think about that); IT’S ONLY MONEY is, succinctly-put, Lewis at his most cartoonish. This beautifully connects to Tashlin’s origins as an illustrator and key director of the famed Warner Bros. Looney Tunes division. Indeed, there are many references to some of Tash’s and Termite Terrace roomie Chuck Jones’ prime WB efforts, prominently the forays into the gadget-laden House of Tomorrow entries which surfaced in such classics as Jones’ Dog Gone Modern (1939), Tex Avery’s 1949 MGM short, appropriately entitled The House of Tomorrow, and, later, in the live-action Tashlin-scripted prop-posterous finales of the Red Skelton and Lucille Ball comedies The Fuller Brush Man and The Fuller Brush Girl (1948 and 1950).

Additional cartoon connections come from the cast: as Lewis’ poor-little-rich girl niece Mae Questel, the screen’s immortal voice of Betty Boop, is outstanding, especially when attempting yoga exercises to slim down for her wedding to slimy lawyer-villain Zachary Scott. Scott, in his final performance, provides a casting tour de farce, magnificently satirizing his legendary sinister stints from 1944’s The Mask of Dimitrios and 1945’s  Mildred Pierce (tossing this gig to a comic specialist like Harvey Korman probably would have worked, but nowhere near as effectively). Scott’s participation was a stroke of genius; it sadly also demonstrates how Hollywood did the actor dirt by not giving him more comedy to do. LST, he’s pretty damn funny! Scott’s moron henchman is Jack Weston, a self-proclaimed charter member of the Peter Lorre Fan Club, who revels in terrorizing a roast with an icepick. The violence and killings are particularly shocking for a supposedly kids-oriented movie, but, then again, this was a done-on-the-cheap knock-off – so Paramount haphazardly looked the other way; for them (as with its creators), IT’S ONLY MONEY was part of a Jerry Lewis quota needed (as with their Elvis Presley pics) to fill the studio’s annual schedule.

The va-va-vroom factor is ably filled by the sleek-bodied Joan O’Brien as the luscious mysterious nurse who soon suspects foul play and may (or may not) be falling in love with Lewis. Even her name, Wanda Paxton, is quintessential femme fatale noir. Tashlin directs her entrances via askew comic book panel angles, pulling back from her amazing legs running down steps and high heels clicking off wet pavement mean streets.

An early sequence wherein Lewis pretends to be White is hilariously sabotaged by the arrival of client/man-eater Pat Dahl, who concurrently terrifies/arouses Jerry into freak-out mode. Her maneuvering him into a corner is nothing less than a dry hump, rubbing the frightened impersonator up against a water cooler, which starts to steam boil to furious crescendo – visually far more sexually explicit than anything in Stanley Kubrick’s Lolita, released the same year.

Similarly, Jerry’s near-death encounters are as funny as they are cruel, often involving some fantastic screen denizens like Barbara Pepper as a butch fisherwoman who inadvertently saves Lester’s life and whose livelihood Lewis all but ruins. Another noir nod is the appearance of famed heavy Ted de Corsia as an investigating cop.

Lewis’ clash with technological innovations culminates in the Merrie Melodie climax where, pursued by man-eating lawnmowers, he triumphs in a Tashlinesque victory that surely would have delighted Jacques Tati (or any other Frenchman). The comedian’s obsession with outlandish high-tech wizardry isn’t that far-out today, as IT’S ONLY MONEY hovers around such crazy gadgets as large widescreen interactive TVs and iPhone-like visual communication devices.

Of course, with the possible exception of Ross Perot, what affluent one-per-center would ever hire Jerry Lewis to fix their television? This riddle for the ages is brutally answered by the aforementioned White, who painfully is the pic’s receiving end of a barrage of sight gags – the zenith (no pun) being the astronaut helmet crowning with a portable TV unit.

While much of the credit for IT’S ONLY MONEY’s success belongs to screenwriter John Fenton Murray (who would go on to pen the underrated Howard Hawks comedy Man’s Favorite Sport?), the lion’s share of the verbal laughs are the obvious contributions of the director and the star. Some of Jerry’s greatest malapropisms abound during the course of the picture. Lewis’ Mickey Spillane/TV detective slang is bitch-slapped out of him by an irritated White, who demands that he stop with “…the idiot television talk.” Jerry admittedly can’t help himself, proclaiming that “I’m a TV thing.” When threatened by Scott’s and Weston’s Smith and Wessons, Lewis pleads, “I’m too tall to hurt!” Lester’s referring to would-be paramour Wanda’s profession as “…a sick pill or medicine betters” is enough to bring tears to Shakespeare’s eyes (or any other semi-literate). Furthermore, his stunning declaration of “You made my living life no death” is pure gold (well,…maybe Goldwyn), delivered with the assuredness of Barrymore at his peak (John Drew, that is). Astoundingly, Lewis’ discussion of his love of cats with girlfriend O’Brien (resulting in being nicknamed Lester “Pussy” March) made it by the censors.

Scenes of Jerry immersed in a giant fish head or sticking a soldering iron up his nose constitute vintage Lewis, the stuff we’d love to have seen the likes of Warren Beatty or Robert Redford do on-camera and secretly suspect Mel Gibson does do off-camera. These outrageous Jerry-rigged moments are sledge hammer-subtly appended by brick-wall product placement exteriors featuring one-sheets of the comedian’s previous cinematic outings, such as The Geisha Boy and The Errand Boy.

The slick score by Walter Scharf is another plus, perfectly Henry Mancini-ing it to the gills with jazzy Peter Gunn consonance (although the frugal 83-minute running time may explain the Bobby Van-credited musical numbers – of which there are none).

The B&W W. Wallace Kelly photography is aces, admirably providing the necessary hard-boiled look (although the occasional faux close-ups of originally-shot blown-up two shots really show through on Blu-Ray). In general, the Olive Films Blu-Ray is excellent: a near pristine 35mm crystal-clear transfer, which the mono audio ideally compliments.

As earlier indicated, despite its obscurity, this movie is one of the consummate achievements in the Jerry Lewis-Frank Tashlin canon; it’s also one of the Lewis titles that the comic’s legions of non-fans begrudgingly admit to liking. So open up your wallets and take a chance…after all, it’s only… (no, I can’t bear to even say it)… 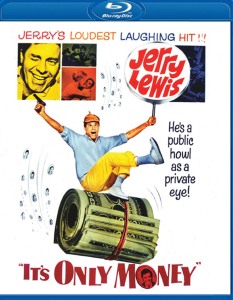